Guest lecture on Architecture of the Vijaynagara Empire

Ar. Yashaswini is collaborating with Prof. Adam Hardy of Cardiff University, through her practice Esthétique Architects, on a unique temple project which will be built in the manner of the ornate eleventh century 'Hoysaá¸·a' style at Venkatapura, Kolar, which is based on research perspectives of the rich repertoire of building traditions of the time and region. Ar. Yashaswini is the author of the book 'Bangalore: The Early City, AD 1537 - 1799,' which traces the development of Bangalore city, focusing on the architecture and settlement pattern of its earliest urban area, the PÄ“tÄ“, and the oval Fort. She is also visiting Associate Professor at the Dayananda Sagar School of Architecture, and has penned many articles in leading newspapers, given guest lectures at reputed colleges in the city and been part of many panel discussions.

Ar. Yashaswini started the lecture with an introduction to the Karnata-Dravida style of architecture seen in the state of Karnataka. This style of architecture is a rich mix of Dravidian and Nagara features with refined characteristics such as stellate planning, exquisite ornamentation and mastery over stone as a building material.  She enlightened the students regarding the town planning and physical infrastructure discovered in Hampi during recent excavations. It was interesting to note that Hampi was endowed with a well engineered system of rain water harvesting and water supply network designed to complement the topography of the region. She gave the students an insight into the defensive architecture of the Vijayanagara Empire where architecture became an important tool in safeguarding the empire from invaders.

Ar. Yashaswini focussed the lecture on the intricacies of temple architecture of Hampi while discussing examples such as the Virupaksha Temple, Vijay Vittala Temple and the Hazara Ram temple. She simplified the Dravidian elevational features and displayed to students how elements such as Kuta, Shalas and panjara are used as modular elements in the Temple Vimana. The knowledge shared by Ar. Yashaswini will be of special use to students during the upcoming heritage documentation studio where they will be documenting various examples of Hindu temple architecture that they visited during a field trip to Hampi- Gadag during July 2019.

Ar. Yashaswini enthused the students towards working for heritage conservation and restoration in the city. She has also been at the forefront of community driven initiatives to secure tangible heritage of Bengaluru city through EA Samrakshaney, a conservation programme initiated by Esthétique Architects. Notable among these initiatives is the pro-bono Design of a Ganga mantapa to house the recently discovered 8th century inscription in Hebbal, and Heritage documentation of the 17th century Kote Venkataramana Swamy temple in Bengaluru. Students were greatly inspired to see the scope of work in the field of history of Architecture and Conservation. We hope to continue the collaboration with her and involve our students in live projects under her expert guidance.

We would like to thank the management and team at REVA University for their support and constant encouragement towards our endeavours. 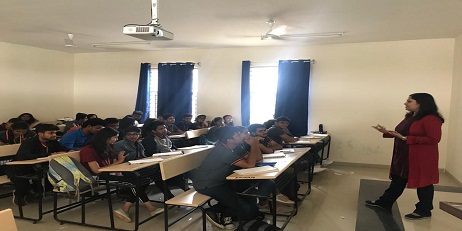