ICT Academy is an initiative of the Government of India in collaboration with the state Governments and industries. ICT Academy is a not-for-profit society, and a joint venture under the Public-Private-Partnership (PPP) model.

The nominations for the competition were opened in August 2018 and had 4 specified categories such as IT & Computer Science, Civil and Architecture, Electrical and Electronics, Mechanical and Automobile.

The team had submitted the nominations in August 2018 in Civil and Architecture category.

Nearly 4131 students forming 1377 teams from 170 colleges across Karnataka State submitted nominations to the competition. The team of experts and officials from the ICT Academy had screened all the projects and selected 183 students in 59 teams from 21 colleges to semi-finals that was hosted by Alliance university being the state partner of ICT Academy on March 22nd 2019. Out of 59 teams that were selected to semi-finals one among them was Tejas.C and team of final year Civil Engineering Students under the guidance of Asst Prof. Prashanth N school of civil engineering, Reva University.

The semi-finals held on 22-03-2019 at Alliance university. A Ppt presentation on our project Air reform was given in front of Technical jury members in a seminar hall and answered questions that was asked by the jury members, followed by a personal interaction session with the jury members. The selection criteria was based on Quality of Innovation, Financial Feasibility, Potential and/or Actual market Impact. Out of 59 teams top 10 teams/Projects were selected for Finals. Air reform is one of the Top 10 projects that was shortlisted. The finals were conducted on 23-03-2019 at Alliance university. The Finals started with Presentation on the project of all the projects. The industry experts were present in the finals as jury members and judges. Then the jury members and judges had a project demo examination and interactions. 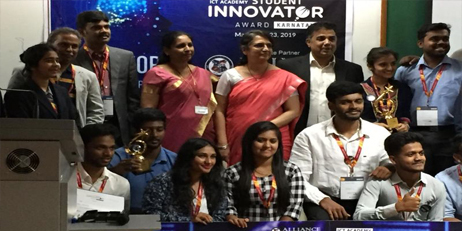