Ms. DishaOberoi, RJ, RED FM 93. 5, who has tied up with Election Commission to spread awareness on voting and has been actively involved in causes related to that was the Chief Guest of the event. Dr. P. Shyama Raju, Honorable Chancellor, REVA University presided over the meeting along with Dr. S. Y. Kulkarni, Vice Chancellor, REVA University and other dignitaries gracing the occasion.

Jagruti Phase 1 started in 2018, was the “antecedent to a thought that needed youth participation” said Dr. S. Y. Kulkarni. It ripened into a wonderful conclusion; a 12-day survey process where students and faculty members of REVA were engrossed in an interactive session with every resident of Byatarayanapura Constituency of Bengaluru. Phase 1 concluded taking a positive direction with an overwhelming response from residents.

Encouraged by the success of the survey, RELA spearheaded Jagruti Phase 2, a more participatory podium. Students will engage residents with powerful enactments, songs, performances and more. This time the engagement will be more direct and hands on. The inauguration also released the Jagruti Phase 1 Souvenir- a chronicle of the work accomplished and a record of the experience in the form of a booklet.

“It falls on your shoulders, everyone present here, to encourage the other to vote” articulated Disha Oberoi, who is considered a youth icon for her continuing support for causes and initiatives for public welfare. Dr. P. Shyama Raju took this moment to further motivate students of REVA in “realizing the vision of a better nation”

More than 1 lakh homes were visited in Phase 1. With this staggering achievement, REVA became one of the pioneers to herald a cause so closely associated with national development. The efforts that found fruition with the hard work and commitment of REVA, was recognized on 25 January 2019, International Voter’s Day, where Dr. P. Shyama Raju, Honorable Chancellor, REVA University, was felicitated by the Governor of Karnataka, Shri. Vajubhai, Rudabhai Vala along with other dignitaries of the State Election Commission for ushering in social awakening through Jagruti. Phase 2 is the beginning of marching this awakening to action. 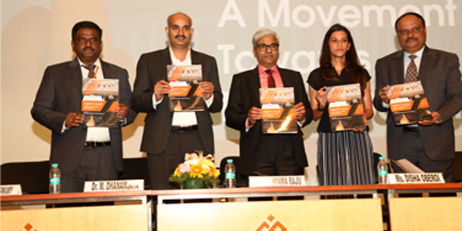