The School of Architecture, REVA University has organized an opportunity for the students to attend a 7 days Educational Tour to North India. Students were taken to places of architectural interest, focusing on Islamic, Colonial and Contemporary Architecture which is part of their coursework. The overall trip was held from 04/01/2020 to 11/01/2020.

1. Chota Imambara, Lucknow
The structure has been inspired by the design of the Charbagh pattern, with a single stream running through the centre of the garden. It is an amalgamation of the elements (domes, several turrets and minarets) of Persian and Indo-Islamic styles of architecture. Sketching Exercise guided by Faculty members.

1. Bara Imambara, Lucknow.
The Bara Imambara of Lucknow is one of the most famous monuments of the city. Also known as Asfi Imambara. The Bara Imambara has a unique style of construction. The Imambara is primarily known for its incredible maze, known as Bhul Bhulaiya locally, which is located on the upper floor of the monument. Building Visited Asafi Mosque, Shahi Baoli, Bhul Bhulaiya.  Sketching Exercise guided by Faculty members.

2. Rumi Darwaza, Lucknow.
The architecture of Rumi Darwaza is distinctive and in sync with the Nawabi gharana popular in the Awadhi region. Unlike the Mughals, who used red stone, the Nawabs of Lucknow used local bricks and limestone which was much easy for carving intricately detailed designs than hard stone. Measured drawing and Sketching Exercise guided by Faculty members.

1. Taj Mahal, Agra.
Constructed entirely out of white marble in the 17th century, it is among the finest edifices of Mughal architecture. It was built by the Mughal Emperor Shah Jahan as a memorial for his third wife, Mumtaz Mahal. Covering an area of approximately 42 Acres, the Taj Mahal was constructed using white marble obtained from Makrana in Rajasthan.
2. Agra fort, Agra.
A massive fortification located on the right bank of the River Yamuna in Agra, Uttar Pradesh and is made entirely of red sandstone. A walled city made from red sandstone brought to Agra all the way from Rajasthan. It is the perfect example of the Mughal style of art and architecture. Building visited Diwan-i I Khas, Diwan-i I Aam, Khas Mahal and Jahangiri Mahal.

1. India Gate, Delhi.
The All India War Memorial, popularly known as the India Gate, is located along the Rajpath in New Delhi. 42-meter tall historical structure was designed by Sir Edwin Lutyens and is one of the largest war memorials in the country.
2. Qutub Minar, Delhi.
It is a classic example of Indo-Islamic architecture. The Qutub Complex consists of various historical structures-built decades ago depicting the rich history of Delhi. Building visited Quwwat-ul-Islam mosque, Alai Darwaza, Iron Pillar.
3. City Walk, Delhi.
Walk guided by Faculty members to explain supremacy in built pattern, urban design, planning and historical importance.

1. Humayun’s Tomb, Delhi.
The design of Humayun's tomb is a typical Mughal architecture with Persian influences and was conceptualised by Persian architect Mirak Mirza Ghiyas. The 25-acre plot on which the building stands is one of the first to have been laid out in a manner based on the description of an Islamic Char Bagh (“paradise garden”). The garden is divided into four large squares by means of causeways and water channels.
2. Lotus Temple, Delhi.
The temple is built of Greek white marble in the shape of Lotus flower, composed of 27 free-standing marble-made "petals" organized in bunches of three to form nine sides. The design of this shrine was conceptualized by Canadian architect Fariborz Sahba. The Temple is designed in such a way that no external lighting is required to light up the huge prayer hall. 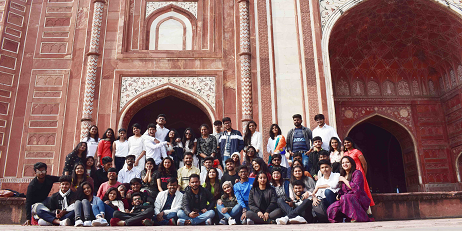