School of Architecture, REVA University organized anexpert lecture on Frank Owen Gehry and one of his famous work- Louis Vuitton Foundation, Paris. This talk was organized mainly for the 4thsemester students, as part of their curriculum, where they have to be introduced to the master Architects of Post Modernism and Deconstructivism.

Prof. Shubhi Sonalshared her wonderful experience of visiting the Louis Vuitton Foundation as part of the Europe trip organized by the School of Architecture in the year 2018. She divided her presentation into three parts- Persona, Philosophy and his Projects. Some of the important facts of her presentation are mentioned below.

Frank Owen Gehry is a Canadian born American contemporary architect. He started his practice by designing cardboard furniture, since his designs was not accepted by the people, initially. Later he experimented his design philosophy by constructed his own residence in Santa Monica in California known as ‘Gehry residence’. Gehry's avant-garde design caught the attention of the architectural world, ultimately launching his career to new heights. His design philosophy main included Deconstructivism. Though much of Gehry's work has been well-received, reception of his work was not always positive. Some of his high-concept buildings, includes the Walt Disney Concert Hall in downtown Los Angeles, the Dancing House in Prague, 8 Spruce Tower in Lower Manhattan and the Guggenheim Museum building in Bilbao, Spain. The Santa Monica home, like much of Gehry's work, is an example of the Deconstructivist style—a post-structuralist aesthetic that challenges the accepted design paradigms of architecture while breaking with the modernist ideal of form following function. Gehry is known for his choice of unusual materials as well as his architectural philosophy. Most of the works of Gehry are inspired from art works such as painting and sculpture. Gehry has also played himself on television programmes, including The Simpsons.

Coming to the Louis Vuitton Foundation, The design responds to the setting of the Jardind’Acclimatation, evoking the tradition of 19th-century glass garden buildings, the role of the Jardin in cultural memory and the desire to create a contemporary art museum that will be attractive and welcoming to the children and families who frequent the Jardin. Constructed on the edge of a water garden created especially for the project, the building comprises an assemblage of white blocks (known as “the icebergs”) clad in panels of fiber-reinforced concrete, surrounded by twelve immense glass “sails” supported by wooden beams. The sails give Foundation Louis Vuitton its transparency and sense of movement, while allowing the building to reflect the water, woods and garden and continually change with the light. The ground-level entrance hall serves as the entry to both the museum and the Jardin. It is designed as an active social space, featuring a restaurant and bookstore. The large, multi-purpose space directly adjacent to the entrance hall may be used as an auditorium accommodating 350 persons, an exhibition space, or event venue. As visitors move from gallery to gallery within the building, the large expanses of glass provide picturesque views of the gardens, integrating the landscape into the experience of the museum.The project was famously known for its use of innovation in digital design and construction, setting a new standard for the use of advanced digital and fabrication technologies. More than 400 people contributed design models, engineering rules and assembly constraints to a 3D digital model.

Prof. Shubhi Sonal concluded her lecture by explaining how the guide took them through the Louis Vuitton Foundation, explaining about the design, starting from the top of the building and descending to the lower floors and also by playing an interesting video of the architectural journey of Louis Vuitton Foundation, explained by the architect himself. 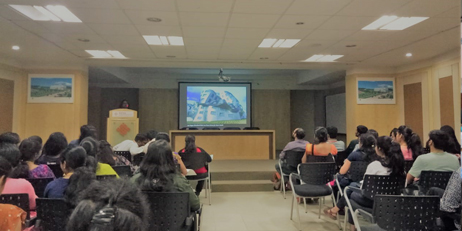