The School of Computing and Information Technology with an objective of providing Internship, Training, and Industrial visit for students,got the opportunity to visit“ BSNL” at Jaynagar 4th block, Bengaluru.

Faculty members along with batch of 6th semester ‘B’ section students (around 60 students) from School of Computing and Information Technology visited“ BSNL” at Jaynagar 4th block ,Bengaluru on Friday, 29thth March, 2019 at 9.30 AM as per the schedule.

About the Company:
Bharat Sanchar Nigam Limited (abbreviated BSNL) is an Indian state-owned telecommunications company headquartered in New Delhi. It was incorporated on 15 September 2000 and assumed the business of providing telecom services and network management from the erstwhile Central Government Departments of Telecom Services (DTS) and Telecom Operations (DTO) as of 1 October 2000 on a going-concern basis. It is the largest provider of fixed telephony and broadband services with more than 60% market share, and is the fourth largest mobile telephony provider in India. BSNL is India's oldest communication service provider and its history can be traced back to the British era. During the British era, the first telegraph line, was established between Calcutta and Diamond Harbour. The British East India Company started using the telegraph in 1851 and till 1854 telegraph lines were laid across the country. In 1854, the telegraph service was opened to the public and the first telegram was sent from Mumbai to Pune. in 1885,The Indian Telegraph Act was passed by the British Imperial Legislative Counsel. After the bifurcation of post and Telegraph department in 1980s, and with the creation of Department of Telecom by 1990s, eventually led to the emergence of the State owned telegraph and telephone company BSNL. BSNL then continued the telegraph services in India until it shut down telegraph services completely in July 15, 2013.

Information Learnt:
BSNL Mobile is a major provider of GSM cellular mobile services under the brand name Cell one. BSNL provides a complete telecom services solution to enterprise customers including MPLS, P2P and Internet leased lines. It provides fixedline services and landline using CDMA technology and its own extensive optical fiber network. BSNL provides Internet access services through dial-up connections as prepaid, NetOne as Postpaid and DataOne as BSNL Broadband. BSNL offers value-added services such as Free Phone Service (FPH), India Telephone Card (Prepaid card), Account Card Calling (ACC), Virtual Private Network (VPN), Tele-voting, Premium Rate Service (PRM) and Universal Access Number (UAN). BSNL also offers the IPTV which enables customers to watch television through the Internet and Voice and Video Over Internet Protocol (VVoIP). In 2007, BSNL announced plans to provide 5 million broadband connections and secured 80% of the INR 25 billion rural telephony project of the Government of India. On 20 March 2009, BSNL launched blackberry services across India. BSNL paid Rs. 101.87 billion for 3G spectrum in 2010. As of 2011, BSNL offered coverage in over 800 cities across India. BSNL launched in 2012 a 3G wireless pocket-sized router called Winknet Mf50.[10][11] BSNL 3G provides HSPA+ service with a top speed of 21.1 Mbit/s downlink and 5.76 Mbit/s uplink. After providing it for 160 years, BSNL discontinued its telegraph service on 15 July 2013. It began delivering telegrams to the public in February 1855; this service was upgraded to a web-based messaging system in 2010 and had been offered through 182 telegraph offices across India. Bharat Sanchar Nigam Limited, a Public Sector Enterprise, also provides fiber plans for the home, which are generally known as BSNL FTTH broadband service. This is the fastest broadband service provided by BSNL, offering speeds up to 100Mbit/s to home-based Internet users. 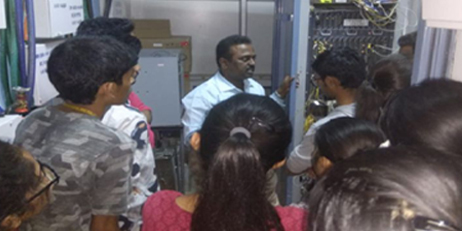