Workshop Objectives : The objectives of the Workshop is to,

1) Help students aware about about latest, trending and most demanded technology and to train them in the same.

2) Help student to be technically confident, so that they can explore themselves at college level, national and international level.

Workshop Outcomes : On completion of workshop the Students will be,

1) Familiar to Virtual Reality and Augmented Reality. They will learn about the Software’s and their functioning in order to develop their own projects.

Resource Person : Mr. Sandnyit Pathare Works has Sr. Design Engineer at Indian Tech Group. He has Completed BE in Electronics and Communication and ME in VLSI design and Embedded Systems.

He has Conducted more than 92+ Workshop on technologies like Robotics, Internet of Things, Mobile making, Virtual reality, Augmented reality, Quadcopter, Humanoid in IIT’s, NIT’s and major institutes in India.

Some of his key Skills are :

He is Proficient in using following tools:

1) Conducted the biggest AI workshop for Mumbai University students in 2018.

2) Conducted the biggest Mobile Making Workshop at Government college, Masab Tank with an estimate count of 250 students in August2017

3) Conducted the biggest Internet of Things Workshop at Bishop College, with an estimate count of 200 students in September2016

4) Conducted Faculty Development training of M.Tech. and Phd faculties on IoT at B.V.MCollege. 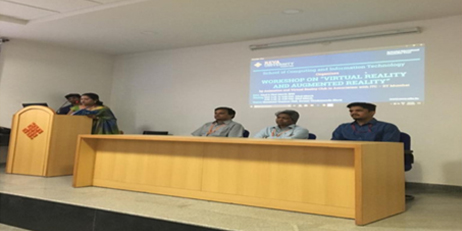